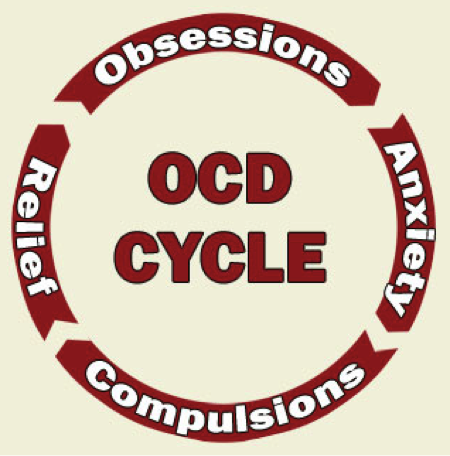 “An obsession can grow from nothing but the desire to suppress a thought” Wegner, 1989

A diagnosis of OCD involves experiencing Obsessions and Compulsions. Obsessions are recurrent and persistent thoughts, urges or impulses that one experiences as intrusive, unwanted and often distressing. A person will believe that their thought is true or problematic and so will attempt to ignore, suppress or neutralise it. As an attempt to supress the distressing thought, a person may engage in repetitive behaviours or mental acts. These behaviours are known as compulsions. In the process of completing the compulsions the person may feel a short-term reduction in their distress however this does not last long.

Some common Obsessions include: contamination, harm to self or others, violence or aggression, blasphemy, sex, doubts about safety or memory, order or symmetry.

Some of the common thinking errors people with OCD make include: the belief that one has the power that can bring about or prevent negative outcomes e.g. if I think that it will happen, it will, believing that complete control over one’s thoughts is necessary and possible, believing that with a lack of evidence that a situation or object is safe, it means it is dangerous. 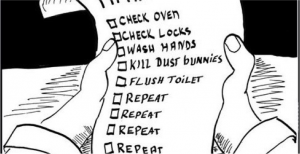 You have to have compulsive behaviours to go with the mental obsessions.

OCD can be purely obsessional which means that some people with OCD may only complete mental rituals without having compulsive behaviours. You may not always see OCD and there could very well be a mental battle going on in someone’s head without you knowing.

Being orderly or clean means I have OCD.

Not necessarily. Often people mistake orderliness or cleanliness as a symptom of OCD. Really with OCD we are looking for those intrusive obsessive thoughts that cause distress, occur frequently and also cause a level of dysfunction in day-to-day life. If perhaps you had an unwanted thought that your family were going to die and you had to wipe the table 4 times to stop that from happening, that might be more indicative of OCD but general cleanliness and orderliness is not.

Stopping a compulsion can be anxiety provoking and difficult. Imagine someone telling you to jump off a dive board if you had a fear of heights, not so easy. That is why treatment such as individual counselling is gradual and stepped. To stop your thinking is almost impossible as that is quite an involuntary mechanism. Through treatment you learn ways to sit with uncomfortable thoughts without trying to get rid of them.