Say No to Bullying

Say NO to Bullying….

On Friday 16 March 2018 and get ready to say ‘Bullying. No Way!’ with schools across the nation. This National Day of Action is Australia’s key anti-bullying event for schools.  In the lead up to this day, it is useful to highlight some facts about bullying.

Bullying is defined as:

“unwanted, aggressive behaviour that involves a real or perceived power imbalance. The behavior is repeated, or has the potential to be repeated, over time”.

In order to be considered bullying, the behaviour must be aggressive and include:

It is not considered bullying if children exclude someone on the playground now and then or don’t invite someone to a party. Repeated and deliberate exclusion, however, can be bullying.

Children may verbally or nonverbally communicate their dislike of another child. This is okay, as long as they don’t start rumors or verbally abuse the other child.

A child might unintentionally bump into or trip another child. This it is not bullying if it is not deliberate.

It is natural to want friends to play a certain way, and some children take the role of being the director. Learning to lead skillfully is a lifelong process, and most kids haven’t mastered it.

While this is not great behavior, it is not considered bullying unless there are repeated instances. Of course we should teach our children that one single joke about someone may hurt that child’s feelings, and it’s not okay.

We all argue, and arguments will inevitably happen at school.

People who are bullied are more likely to: 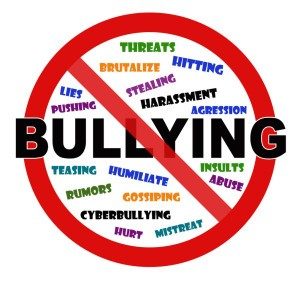 Both Adults and young people can be affected by bullying. Make a stand this March 16th and Say NO to Bullying.

If you or someone you care about has been impacted by bullying, The Psych Professionals is here to help. We offer individual counselling for adults and children.

Gerda was born in South Africa and moved to Australia with her young family in 2004. She is a Clinical Psychologist who runs her two very busy private practices in Brisbane. She is a Mum of 3 children who still finds the time to run Private Practice Success Workshops across Australia, empowering other Allied Health Providers on how to run a successful practice! Gerda continually strives to “raise the bar” to ensure her team of clinical professionals have the best support, ongoing training and skills to guarantee The Psych Professional clients receive 1st Class treatment options. The Psych Professionals was the WINNER in the QLD Open Minds Mental Health Achievement Awards in the Category ‘Workplace Award (Small to Medium)’ that was announced during the 2015 Mental Health Awareness Week.