The Psych Professionals can provide counselling therapy for people with eating disorders including anorexia, bulimia and binge eating. Our qualified staff have years of experience in treating eating disorders, and can help people of any age.

It’s important to remember that someone with an eating disorder has a serious mental illness. An eating disorder is not simply an extreme diet or a lifestyle choice. It is something that can take over a person’s life, and it requires intervention and therapy to recover.

Sadly, a staggering 1 million people in Australia are estimated to have an eating disorder, and this number increases every year. 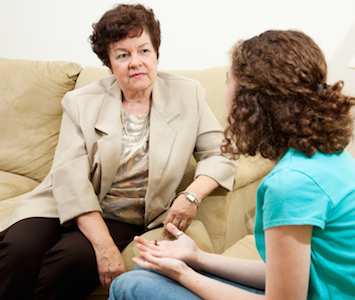 Anorexia is an eating disorder and mental illness that causes sufferers to restrict their food intake to very low levels. They are often extremely thin and are afraid of gaining weight. Despite a very slight frame, anorexics will staunchly believe that they are overweight.

An anorexic will usually combine low food intake with excessive exercise and constant monitoring of their weight. Women and girls with anorexia may also stop having their period.

Bulimia is an eating disorder and mental illness where sufferers binge-eat and then purge. The person will often eat large amounts of food in a relatively short amount of time and then try to remove the food from their body by forcing themselves to vomit or by taking laxatives.

The majority of people with bulimia actually have a normal weight.

Bulimia is also linked with other mental illnesses such as anxiety and depression, which is why bulimia sufferers have an increased risk of suicide.

Binge eating disorder is a mental illness where sufferers binge eat large amounts of food in a short amount of time, whether they are hungry or not. Afterwards they often feel intense guilt and shame. Unlike bulimia, people with binge eating disorder don’t purge (vomit or use laxatives) after bingeing.

A person with binge eating disorder may fast sporadically as a response to how they feel after bingeing.

Early signs of an eating disorder

To prevent disordered eating from becoming a full-fledged obsession, it’s vital to be able to spot the early warning signs. Unfortunately, though, someone with an eating disorder will usually do their best to hide any signs of the problem, making it very difficult to detect and confirm. The person may also be in denial about the problem.

Keep an eye out for any changes in eating behaviour and psychological reactions to food, as well as changes in physical appearance.

If you believe that you or a family member may have an eating disorder, contact The Psych Professionals to find out how therapy can help.