White Ribbon Day is Australia’s campaign to prevent violence against women by working with men and boys to create change. There is currently a worldwide domestic violence crisis, and the statistics are appalling.

These numbers are extremely concerning and means a shift needs to happen in the way we look at, address and approach domestic violence including through counselling. Think about it…….This means you probably know, or will know, someone who is affected by domestic violence – and you may not even be aware of it.

What is violence against women?

The first step in preventing violence against women is understanding its gendered nature. White Ribbon Australia utilised the United Nations definition on violence against women: “Any act of gender-based violence that results in, or is likely to result in, physical, sexual or psychological harm or suffering to women, including threats of such acts, coercion or arbitrary deprivations of liberty, whether occurring in public or private life”. Violence against women affects women’s wellbeing, the people, society and community around her, and affects her participation in society. Women are much more likely to experience sexual violence and violence from an intimate partner, and are also more likely to be afraid of, hospitalised, or killed by an intimate partner.

What is White Ribbon Day?

The reality is, there are many different types of abuse, and all are absolutely unacceptable. The issue is complex however, with many women not realising they are in abusive relationships because the nature of the abuse can take so many forms.

Signs of an abusive relationship

It may not always be easy to identify if you or someone you know is in an abusive relationship because of the many different ways it can present. The perpetrator’s behaviours are typical of the jealousy, possessiveness, put downs, threats, and violence that occur in these relationships. Some common signs are:

What to do if you think you’re in an abusive relationship?

It can be really hard to admit that you may be in an abusive relationship, but it is the first step in seeking help. Please remember that no one deserves to be treated this way, rather you deserve to be loved and respected. You might be afraid to seek help due to your partner’s control over you, but here are a few ways you can seek help:

How to support someone in an abusive relationship 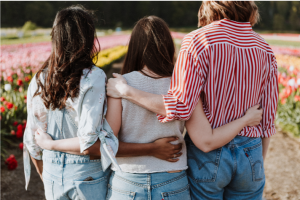 Supporting someone who you suspect or know is/was in an abusive relationship can be difficult. Above all, be open minded while listening to them – don’t rush to provide advice; they need someone to hear them out. To you, from the outside, leaving may be the obvious decision. Someone in an abusive relationship may feel like they must stay for a few reasons, such as children, lack of independence or other financial support, or their feelings. Although this may be hard to hear, be supportive, encouraging and honest. They need hope that things will get better. Offer to help them get in touch with support services without being too overbearing.

This years White Ribbon Day is on 22 November 2019. Let’s have more open discussions about healthy relationships and what we can do to prevent violence against women. Let’s also use it as an opportunity to work with the men and boys around us. Let’s educate young people about abusive relationships, and the different ways it can look. It will take a united and whole-nation effort to change the way we look at domestic violence. Consider joining 214,340 Australians by taking the oath.

“I will stand up, speak out and act to prevent men’s violence against women”, because together, we can make a change.

Register your oath on the White Ribbon website: https://www.whiteribbon.org.au/stop-violence-against-women/take-the-oath/

Behice is a registered Provisional Psychologist with the Psychology board of Australia who completed her undergraduate and Honours studies at Griffith University. Alongside her Psychology work, Behice is currently working in the Learning Support department at a school, which involves supporting students who have been diagnosed with intellectual disability, mental health disorders and other diagnoses in the classroom as well as socially.