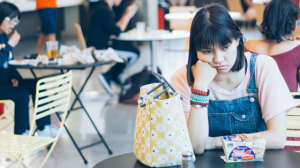 School can be really tough on students’ self-image, and they are quick to label themselves as someone who is “bad at math” or a “D student”. As a high school Learning Support Teacher Aide, I see this on a daily basis. By the time they enter high school, they have already developed a concrete sense of what type of student they are, and what they supposedly can and can’t achieve, and this is something I struggle with every day. A common conversation I have with students entering an exam goes something like this:

“You’ve got this, you’re going to do amazing!” I say with a high five.

“Miss Kara I’m going to fail, I already know” they say with an unenthusiastic high five.

“False! Take that back and tell me you’ll do the best you can!”

I am often shocked by how much they struggle to say that they might have a chance at passing and it breaks my heart. I can assure you that I don’t leave that student until they look at me and say something like “I will try my hardest” or “I will pass”. And even if they don’t believe it, saying it is the first step.

As parents, you play a pivotal role in instilling self-confidence and self-esteem in your children. Often they don’t believe in themselves so they need you to believe in them. The competitiveness of school makes it very easy for children to lose confidence and belief in themselves. This may work as a protection mechanism, such that setting the expectation of failure protects against disappointment by eliciting an “I knew it” response when they receive a bad grade. Although the disappointment may still be deep-rooted in there somewhere, they are able to keep a strong, “carefree” facade. This expectation is a self-fulfilling prophecy, a belief or expectation that an individual holds about a future event that manifests because the individual holds it1. Because they expect to fail, their behaviours will reflect this expectation – i.e. they won’t study or put as much effort in class. On the other hand, if they believe that they can pass, their behaviours will begin to reflect this, and they will start working towards this. 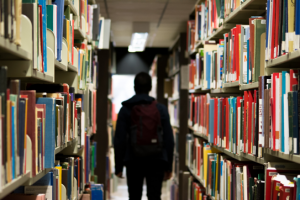 What they need from you is for you to tell them that you believe in them, that their marks do not define them, and that you will love them regardless of what marks they come home with. “They already know this”, you may think, but you would be surprised at the catastrophising thought process some children go through when they experience failure, especially if it is for the first time. A principal said it best in a letter sent home to parents during exam period, “Tell them, no matter what they score, you love them and will not judge them. Please do this, and when you do, watch your children conquer the world”. The rest of the letter is below.

Here are some tips to help foster self-confidence and self-esteem in your children: 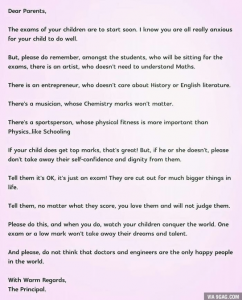 If you would like support for yourself or your child in SE QLD then contact The Psych Professionals. We have a range of options from, animal-assisted therapy to group therapy and even cognitive behaviour therapy.

Behice is a registered Provisional Psychologist with the Psychology board of Australia who completed her undergraduate and Honours studies at Griffith University. Alongside her Psychology work, Behice is currently working in the Learning Support department at a school, which involves supporting students who have been diagnosed with intellectual disability, mental health disorders and other diagnoses in the classroom as well as socially.